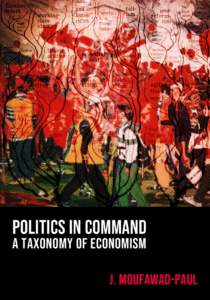 Since the economic crisis of 2008, the concept of social class emerged again as central in critical theory. Temporarily eclipsed in the metropoles by the focus on other sites of oppression, the possible return of class and class struggle to the centre of academic and activist discourse brings with it the same economism that other radical conceptions of politics seemed to displace. Politics in Command seeks to understand what economism is, how it is deployed through socialist analyses, and the ways in which various categories (economy, politics, class, practice, revolution, etc.) are mobilized and classified according to its imaginary.

“J. Moufawad-Paul… deliver[s] an all-round, nuanced exposition of economism, while probing class as it really exists and critically engaging with a variety of views that either deny the primacy of class or dissolve it in the many identities that mediate it.”

—K. Murali (Ajith), author of Of Concepts and Methods and Against Avakianism

“Despite its philosophical detail, Politics in Command is incredibly clarifying for people of the left trying to make sense of our situation in the 2020s. J. Moufawad-Paul deftly navigates the perilous and complicated terrain of identity politics and class reductionism to arrive at a satisfying critical analysis of economism, a problem rarely (if ever) addressed so directly and provocatively. At the core of this book is a compelling argument that our problem is not in giving analytical primacy to class relations, but in failing to understand the myriad ways class is itself shaped by race, gender and other forms of oppression not normally considered ‘economic,’ and how much is lost in our capacity to organize revolution when we fail to see class as a political, not just economic, category. Characteristically sharp and engaging, Moufawad-Paul again illustrates that the philosophical foundations of our ideology matter and that, if unattended, the scourge of economism leads us into organizational and theoretical dead ends. A book that is at once dynamic and polemical but simultaneously rigorous, nuanced, and sensitive to the specificities of its moment, Politics in Command should be read by everyone trying to build a new communist left.”

—Tyler Shipley, author of Canada in the World: Settler Capitalism and the Colonial Imagination

“With Politics in Command, J. Moufawad-Paul dissects and analyzes the issue of economism, giving devastatingly clear insight into the question of why, in spite of our many and varied efforts, the Left has been unable to advance in any meaningful, qualitative way towards building a revolutionary movement in the imperialist centers. Read this book if you seek to understand why the mass work, union involvement and Left unity efforts you’ve engaged in have failed to bring about the revolutionary consciousness among the workers that you’d hoped and planned for. Read this book if you struggle for revolution in an imperialist country knowing that conditions in the peripheries are different—and want also to understand how those differences impact class analysis, organizations, and organizing tactics and strategies. Moufawad-Paul is trained as a philosopher and works as an academic. But this and all of his political writing reveal at their core, a militant who strives above all else to make his unflinching and methodically evidenced work of use to those of us who seek to understand the world in order to change it. This book is highly relevant and immediately useful; it is a sharp tool to eviscerate the blunt, dogmatic obstacle of economism, in order to create and progress on the path to making revolution.”

—Dao-yuan Chou, author of Silage Choppers and Snake Spirits – The Lives and Struggles of Two Americans in Modern China

“In Politics in Command, J. Moufawad-Paul provides a necessary critique of the normativity of economism while uplifting the urgent necessity of fomenting revolutionary consciousness. This timely study not only describes the impediments of economism, it provides a guide on how to change them. Through an incisive analysis of the past and present iterations of economism such as economic determinism, trade union consciousness, the labor aristocracy, and workerism, Politics in Command asserts that we must understand the political dimensions of class and class struggle to confront the rising tide of neofascism. Like his previous books, J. Moufawad-Paul urges us to arouse, organize, and mobilize toward a “new return” to the notion of the communist party. This can only be done by placing politics in command of the class struggle.”